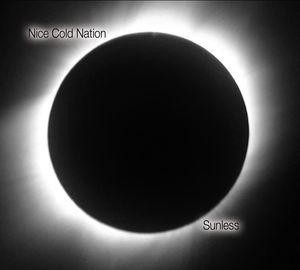 Content: I didn’t find relevant background history about this new French band called Nice Cold Nation. They didn’t spare any effort to self-release their debut work with a nice artistic approach and I here refer to the digipak format of the album.

“Sunless” features 10 songs, which directly leads the listener into a typical new-wave and pop-minded style. The vocal parts are rather sweet-like and clear while the singer can’t really hide his delicious French accent. Some of the bass lines remind me a bit of The Cure, which rather appears to be a reference. But the global production is more into melancholic pop-driven songs. It’s an easy listening experience with some wafting element hanging over the songs, but without any real climax.

Music and vocals together perfectly match, but I’m missing a climax in the music and some passion in the production of the vocals.

“Sunless” remains pretty inhibited and even some of the last cuts featuring a harder kick can’t fully convince. “One Last Time” and “The Final Fear” both bring some little improvement, but nothing more.

Conclusion: Nice Cold Nation has to improve most aspects of their composition to reach a real credible level. Despite of a few good ideas, this album is insufficient.