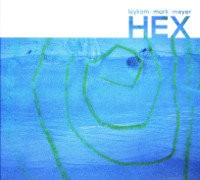 Content: If you’re familiar with the Frank Mark Arts roster you for sure have already heard many collaborations between artists and especially between Roman Leykam and Frank Mark. For the “Hex”-album both music mates invited Frank Meyer to join in.

“Hex” reveals a true passion for sounds and noises. The composition is more based upon the decomposition of sounds played by guitar, bass and synths to manipulate them by studio effects to create something new. It results in a rather abstract and definitely experimental way, but “Hex” is an accessible album.

The trio took care to compose slow rhythms, which have been mixed with different influences like jazz, tribal- and mainly psychedelic elements. Some passion for Pink Floyd is not really a surprise, but “Hex” sounds totally different although based upon multiple psychedelic ingredients mainly created by guitar parts. Some of the songs are a little less cinematographic as well and I mainly refer to “Figments Of The Imagination”, which is a rather appropriated title. This cut also reveals impressive sound manipulations.

Another cinematographic-orientated passage comes through on “Bracing”, which I also like for the mix of lounge- and dub influences. But the psychedelic input remains the most important. I have a little preference for songs like, “The Function Of Dreaming” and “Dead Room”.

Conclusion: “Hex” sounds like the offspring between psychedelic music and pure experimentation. It’s pretty minimal and abstract, but still pretty accessible in sound.

Best songs: “Figments Of The Imagination”, “Dead Room”, “The Function Of Dreaming”.

Since you’re here … … we have a small favour to ask. More people are reading Side-Line Magazine than ever but advertising revenues across the media are falling fast. And unlike many news organisations, we haven’t put up a paywall – we want to keep our journalism as open as we can. So you can see why we need to ask for your help. Side-Line’s independent journalism takes a lot of time, money and hard work to produce. But we do it because we want to push the artists we like and who are equally fighting to survive. If everyone who reads our reporting, who likes it, helps fund it, our future would be much more secure. For as little as 5 US$, you can support Side-Line Magazine – and it only takes a minute. Thank you. The donations are safely powered by Paypal.
Tags: Leykam . Mark . Meyer