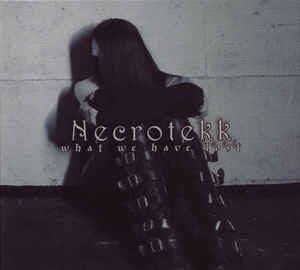 Background/Info: “What We Have Lost” is the debut full length by German artist Seb H. This musician played keyboards in goth-metal formations such as Sun Of Sadness and Killing Suzy, but he was also active as the live keyboard player for Mantus.

Content: Necrotekk doesn’t compose a stereotypical dark-electro format. It’s more a way to experiment with different elements getting unique results. The songs are characterized by strong melody lines, but mainly by a kind of haunting atmosphere supporting the cuts. The songs have been accomplished with bombastic arrangements on one side, but also with more refined piano-like arrangements on other side. There are also a few instrumental cuts featured confirming the dark approach in sound.

+ + + : Necrotekk is a project with a very personal approach in dark-electronics. It’s much more than simply ‘dark’; it’s ‘black-electro’ or should I call it dark-electro with some gothic influences on top?! The songs reflect feelings of despair and loneliness, which have been perfectly illustrated by the mysterious and haunting passages. I also like the melodic aspect of the songs.

– – – : “What We Have Lost” is an intriguing and definitely promising work. I can’t say it’s ‘the’ dark-electro album of the year, but definitely a band to keep an eye on. The work is missing a hit to speak about a fully successful debut. Last, but not least –and I know this is not that important, but the band name is not the most original one as there already is (or was) a dark-electro band named Necrotek (with just 1 k at the end).