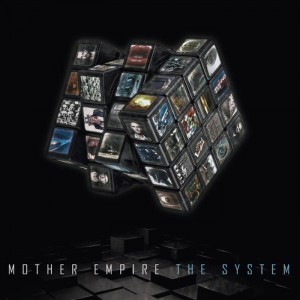 Content: Target Records introduces us to the rock-pop universe of the Copenhagen based Mother Empire. The formation has been presented as a mix of 80s influences of the British new-wave pop and American alternative rock bands.

Quite quickly, the band reminds me of Editors. There’s a similar mix of electronics and pop music with guitar passages on top. The charismatic vocals of Morten Jaeger also remind me a little bit of Editors as well. “The System” rapidly appears to be an album with many little influences, but the songs remain always carried by a solid rock-pop basis. The somewhat moody sounding “Worthless” is an interesting illustration of their sound.

The work is enjoyable although I had to wait for the 6th song “Hands”, to reveal the hidden potential of Mother Empire. This is a beautiful and fully accomplished composition made of brilliant electronic parts and guitar empowering the song. It’s a pity there are no more songs in a similar vein.

“The system” however reveals a few more interesting cuts, but in a somewhat softer approach. “And We Celebrate” is a noticeable and somewhat moody-like song, which sounds a bit into a kind of rock-ballad style. “A Perfect Crime” is another cut I recommend for its beautiful and elevating chorus.

Conclusion: I can’t say that the entire album is catching my attention, but there are a few remarkable songs featured at this debut album. Mother Empire has interesting writing skills and musical ideas they now have to elaborate.

Since you’re here … … we have a small favour to ask. More people are reading Side-Line Magazine than ever but advertising revenues across the media are falling fast. And unlike many news organisations, we haven’t put up a paywall – we want to keep our journalism as open as we can. So you can see why we need to ask for your help. Side-Line’s independent journalism takes a lot of time, money and hard work to produce. But we do it because we want to push the artists we like and who are equally fighting to survive. If everyone who reads our reporting, who likes it, helps fund it, our future would be much more secure. For as little as 5 US$, you can support Side-Line Magazine – and it only takes a minute. Thank you. The donations are safely powered by Paypal.
Tags: Mother Empire