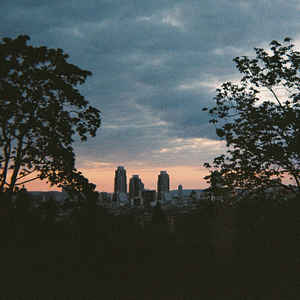 Background/Info: French musician Paul Régimbeau has now been active for many years under the Mondkopf moniker. The band released multiple albums and EP’s. “They Fall, But You Don’t” is the fifth album of Mondkopf, which has been released on their own label In Paradisum.

Content: Mondkopf creates a dark-ambient sound universe, which is joined by numerous sound effects and experimental treatments. The tracks progressively evolve towards a more cinematographic format, which is now  accentuated with passages sacred chants and then pure astral sounds and effects.

The work is quite diversified, but always focused around dark sound manipulations and haunted atmospheres.

+ + + : If Mondkopf can be easily considered as a dark-ambient inspired project, this work definitely doesn’t sound like a classic release in the genre. Paul Régimbeau likes to manipulate noises, which are joined by obscure ambient parts. The main strength of the work is hiding behind the impressive sound creation. I however like the somewhat haunting style supporting the tracks. Speaking for myself I’m more into both debut tracks, which are less cinematographic-like and more into pure sound experimentation showing the most intelligent side of the work.

– – – : I like the progression running through this work although the final part becomes a little less repetitive and predictable. The soundtrack style is now taking over, but is somewhat suffering from creative ideas right at the final track. Mondkopf clearly doesn’t sound as the most accessible project from this scene, but is that a real problem? I don’t think so.

Conclusion: Mondkopf might be seen as the French answer to the numerous Scandinavian and North American bands dealing with dark-ambient music. It’s a different kind of ambient, which is more sophisticated and revealing a different approach in sound creation.