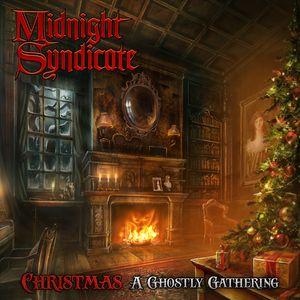 Background/Info: Edward Douglas and Gavin Goszka started with Midnight Syndicate during the late 90s. They’ve released an impressive number of records, which all have this typical ‘haunted house’ atmosphere as the common element. It’s not really a coincidence that their sound has been often linked to Halloween’.

Content: This new opus is based on a haunting Christmas concept, but it quickly becomes clear that the album is not exactly into the typical songs that we are used to hearing during this period. Except a few elements like jingle bells and fragmented Christmas tunes Midnight Syndicate invites us to join their familiar cinematographic universe of gothic and haunted houses music.

The work is once more conceived as an imaginary soundtrack that has been accomplished with bombastic, orchestral and sometimes epic arrangements, which are refined by neo-classic passages. This is gothic music reminding me of images of old black & white movies featuring vampires and other scary creatures. It also sounds a bit cabaret-like, but here again you have to imagine freaky creatures and fantastic stories.

↑↑↑: Midnight Syndicate remains a truly revelation when it comes to speaking about gothic music. This is an impressive and mature production with a strong orchestral approach.

↓↓↓ : I sometimes get the impression that the themes are moving from album to album while the sound formula remains pretty similar.

Conclusion: This album is a radical antidote to Bing Crosby while I more imagine Bela Lugosi as the new Santa Claus.

Best songs: “Carol Of The Bells”, “The Parade Of The Soldiers”.