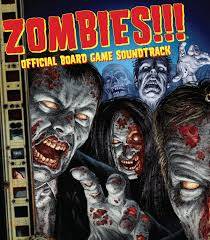 Background/Info: Edward Douglas and Gavin Goszka became recognized composers in a music genre we can easily define as gothic-soundtrack and horror-cabaret. Midnight Syndicate is active since the 90s and has released an impressive number of records. This new album is a soundtrack that was written for the “Zombies Board Game” revealing 18 cuts.

Content: The theme of the album totally fits to the sound universe of both musicians and is an opportunity to discover new haunted compositions revealing heavy, orchestrations and the usual bombast of this band. The haunted atmospheres are joined by a few epic chants, which work great on the first cut.

The composition sounds like pure drama, which has been reinforced with the impressive arrangements and freaky sound passages. This album was clearly conceived as a soundtrack revealing many short cuts. I sometimes get the impression to hear an influence from the legendary “Psycho” movie from Alfred Hitchcock, which is appealing for some extra fantasies this music is appealing to.

+ + +: Midnight Syndicate once more confirms their great writing skills in horror music and especially the soundtrack concept. The heavy bombast and epic arrangements both accentuate this unique sensation. The dark horror strings and other typical piano arrangements are there to achieve this freaky sonic trip.

– – – : This is not my favorite Midnight Syndicate release. I get the impression they mainly reinforced the heavy orchestral part instead of the haunted atmospheres and cabaret approach, which I was used to hearing.

Conclusion: I guess composing a soundtrack for a ‘zombie’ theme must be one of the ultimate dreams of Midnight Syndicate. They did it and once more reveal their dark horror music.