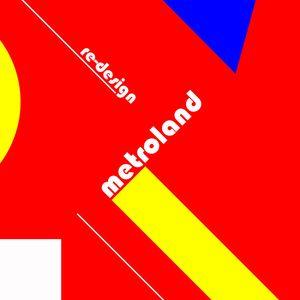 Content: Metroland for sure belongs to the biggest revelations in electro-land of the past few years. Their earlier this year released second full-length “Triadic Ballet” only confirmed the genius of this Belgian electro-pop formation driven by the members of old EBM servants Ionic Vision.

But this year also brought a real drama for Passenger S and Passenger A. They lost their secret force behind the band (cf. Passenger L) who passed away taking the electro-community by surprise and leaving the band in shock.

The show has to go on and we here get a new EP taken from their newest album featuring 3 songs. “Re-Design” is a great and club-minded piece of work taking off by the danceable and contemporary Kraftwerk-inspired “Re-Design”. This is a sophisticated and intelligent piece of electro-pop music carried by a professional production. It’s not what I would call an emulation of ‘vintage’ electro-pop formats, but simply a reinvention of a style!

The EP also features a noticeable new song entitled “Vers La Cote d’Azur” on, which I see a parallel with Kraftwerk’s “Autobahn”. The song sounds like an invitation to go on holidays or at least to travel by Metroland-lines. This is again a great piece of bleeping pop music recovered by delicious synth layers and melody lines.

Last, but not least we get a remix of “Design” by Polynomiq (aka Jean-Marc Melot). The debut album of this band revealed a great taste for vintage electro sounds, which here again might remind you of Kraftwerk so the choice of this band is not what I should call a surprise. The song is quite wafting and simply a beautiful instrumental interpretation.

Conclusion: This is exactly what I expect from an EP: great and danceable music, but Metroland has this extra, sensitive and retro-like touch, which makes their success!