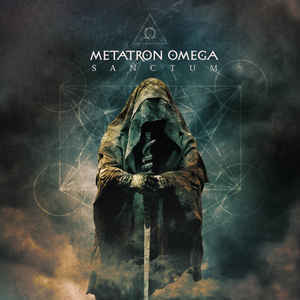 Background/Info: Last year I discovered this Serbian solo-project driven by ‘Scorpio V’ through the debut album “Gnosis Dei”. It remains a brilliant piece of sonic darkness joining ambient- and ritual music. The work of this band is rather conceptual and driven by different esoteric themes from different cultures. “Sanctum” features 6 new cuts by this Prince of Darkness.

Content: The new work moves on where “Gnosis Dei” left off. We get similar influences, which are once again mixing pure dark-ambient passages with an overwhelming ritual approach. Mysterious, religious chants emerge from the depths like an invitation to join a tenebrous universe.

Oppressive buzzing sound waves merge with echoing noises plus deep resonating drones will immediately catch your attention. The impressive chants of invisible monks create this typical ritual sensation, which is also reinforced by some typical elements like gongs.

+ + + : “Sanctum” is a new masterpiece by Metatron Omega who definitely appears to be one of the new ‘coldest’ sensations in the genre. The compositions have been meticulously and patiently built up often reaching a truly sound apotheosis getting you in an imaginary transcendental state. Scorpio V used a great sonic arsenal of noises and samplings (and probably field recordings). The ritual aspect of the work is absolutely phenomenal. The religious choirs have been used in a real freaky way.

– – – : I can’t say that the first tracks are a bit hesitant, but you have to be patient to really feel the impact of this work. I didn’t get a similar effect of surprise as on the debut-work although it remains a brilliant opus.

Conclusion: Metatron Omega sounds like the imaginary guardian operating at the gate between life and after-life. And it rapidly appears that the mortals will not enter into heaven, but get deviated towards a secret and obscure ritual altar.