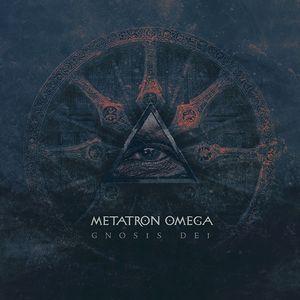 Content: Metatron Omega is a new discovery by Cryo Chamber and the least I can say is that this Serbian solo-project set up by Scorpio V is one of the new dark-ambient names you’ll keep in mind.

So there’s a lot to say and more especially to transpose into music. “Gnosis Dei” features 7 cuts, which remains a magic number when dealing with esoteric subjects so I guess it’s not a coincidence. The work will absolutely move you because the sound waves and ritual-minded passages are too heavy and poignant. It all feels like Metatron Omega is driven by evil forces unleashing their bewitching sound vibes the poor mortals can only, but adhere. Scorpio V reveals himself as the newest Prince of darkness and one of the most talented disciples of Peter Andersson (Raison d’Être).

I don’t want to compare Metatron Omega with the work of Raison d’Être, but there are some similarities in the sound obscurity and ritual aspect of the work. There’s no real innovation, but simply a genius exposure of how dark-ambient music has to sound-like.

There also is a great progression in the writing, which is perfectly illustrated at the opening cut “Apotheosis”, which will hold you in its grip for more than 7 minutes. The final part builds to a climax with a kind of 3D piano part.

“Godhead Emanation” moves on where the previous track stopped and is animated by heavy bells, which are like announcing an obscure requiem. We’re entering throughout a secret universe called ‘hell’, but the final part reveals a kind of prosperity. This is just a short relief as the upcoming tracks bring us back into the darkest and most anguishing corners of our own imagination. “Gnosis Dei” has this secret power to create a dark, imaginary world by the simply strength of music. That’s what ‘ambient’ is all about and which is often lost by a lot of so-called ‘ambient’ formations.

You get the impression of hearing awakened ghosts talking to you and that’s precisely why I linked this band to Raison d’Être. Just pay attention to the outstanding “Ordo Draconis” and “Hierosgamos” to seize the ritual dimension this work has been with. Dark noises, spoken spirit-like words, bells and icy progressive sound waves are literally exposing the listener to an invisible, disturbing presence.

The few tracks left renew the obscure passages and ritual parts. The sound creation remains colored by the darkest imaginable vibes and reinforced by mysterious chants resulting in a truly esoteric climax.