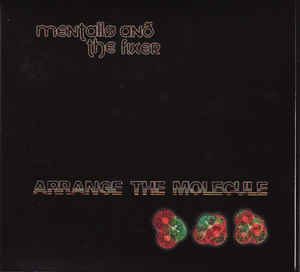 Background/Info: Mentallo & The Fixer will next year celebrate its 30th anniversary. The Texan project is no longer releasing new material at regular basis. “Arrange The Molecule” is the first new opus since “Music From The Eather” (2012).

Content: If you’re familiar with the sound of this artist you rapidly will recognize the familiar electro complexity. The tracks have been accomplished with dense and multiple sound layers, sometimes creating a chaotic impression although accomplished with some fine, icy bleeps and other delicate tunes.

Gary Dassing doesn’t care about music standards, but simply seems to exorcise the endless music ideas running through his brain. From industrial sequences to avant-garde electronics to pure IDM, this album is a sonic voyage.

Next to the regular album format you also can purchase the limited edition featuring extra songs and remixes, which still bring us back to previous work.

Dassing says about this album ‘It’s my approach to try and ping as many frequencies across the spectrum as possible, and get this dense full sound, with a lot of movement in the stereo field. … I just want people to trip out on it, I don’t expect fans to like every piece I do, u love some of it and u don’t, it’s just music, fxxk it’s not going to change the world in any major capacity, play it to freak your friends out, get a laugh out of it. Use the music as your drug!’.

+ + + : Mentallo & The Fixer remains a band with a very own sound DNA characterized by complexity, bombast and yet refined passages. This new work excels in experimentalism and visionary sound treatments. Who’s Gary Dassing? Is he really a musician? Maybe a sound collector? Or a genius sound alchemist who’s transforming any single sound into another noise dimension? We all have to make our mind, but he definitely is an artist you can’t compare with any other formation.

– – – : The sound formula is hard to seize and not exactly the most accessible one. Mentallo & The Fixer makes music for people who aren’t satisfied with clichés and all those bands sharing the same equipment, the same sounds and in the end the same kind of songs! But it’s a difficult album, which sometimes gives you the impression of pure improvisation and total chaos. I’m missing vocals or chants/choirs to get it maybe a little less more accessible.

Conclusion: Mentallo & The Fixer makes me think to a movie of David Lynch; you’ll never totally catch the plot, but it’s always fascinating!

Best songs: “Treat It Like A Loaded Gun”, “Just What I Had Been Missing”, “Gammera”, “The Moment You Realize …”, “Metaphysical Agents – Antigen”.

Since you’re here … … we have a small favour to ask. More people are reading Side-Line Magazine than ever but advertising revenues across the media are falling fast. And unlike many news organisations, we haven’t put up a paywall – we want to keep our journalism as open as we can. So you can see why we need to ask for your help. Side-Line’s independent journalism takes a lot of time, money and hard work to produce. But we do it because we want to push the artists we like and who are equally fighting to survive. If everyone who reads our reporting, who likes it, helps fund it, our future would be much more secure. For as little as 5 US$, you can support Side-Line Magazine – and it only takes a minute. Thank you. The donations are safely powered by Paypal.
Tags: Mentallo & The Fixer