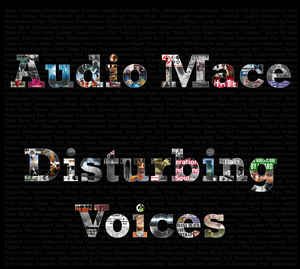 Background/Info: Audio Mace is an American duo driven by Chris Wikman and Al Baldwin. I never heard of the band before, “Disturbing Voices” being my real introduction.

Content: Sound wise this album is covering multiple influences and is hard to label as any particular genre. We definitely can speak about an experimental, electronic production featuring an impressive arsenal of spoken samplings and speeches. The ‘voices’ have been often manipulated and fragmented, but always creating a mysterious and somewhat anguishing sphere. You’ll recognize numerous famous people behind the samplings.

+ + + : Audio Mace has something retro-like reminding me of 80s experiments with speeches and spoken samplings. It definitely has something experimental and somewhat pre-industrial like. There’s a kind of spooky atmosphere supporting most of the tracks, but the content of the samplings aren’t that innocent. It all feels a bit like there’s a message coming through. “Hate Speech” is one of the most noticeable cuts for the samplings moving from Hitler to Trump to finally end with the Dalai Lama. The ‘voices’ are clearly more important than the music although the experimental and somewhat minimal-like writing are totally fitting with the samplings.

– – – : Audio Mace is not reinventing experimental music and first of all reminds me of early pioneers. It’s not that original and not the most accessible music… for so far we can speak about ‘music’.

Conclusion: I can’t say that I’ve been totally convinced by this production although it reminds me of good old souvenirs and I think it’s rather interesting to see a band moving back to what I would call the roots of ‘experimental’ and ‘industrial’ music.