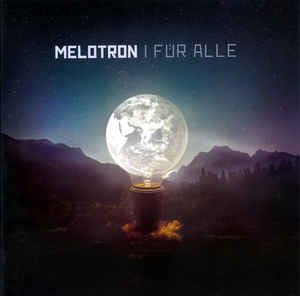 Background/Info: Andy Krüger, Edgar Slatnow and Kay Hildebrandt started in the early 90s as The Vermin. In 1995 they set up Melotron, which rapidly became one of the most successful German synth-pop formations. “Für Alle” is not exactly a comeback and yet… This is their first new studio album since “Propaganda” released in 2007.

Content: Time hasn’t had a real impact on Melotron. This new album sounds as if they’ve never been away. This is pure and classical synth-pop music, which sounds sweet and sensual, but still groovy and dance. You directly feel the experience and maturity emerging from the production. It resulted in a few potential hits.  Melotron also dares to experiment with a few more influences such as cabaret-electronics (cf. “Eigentlich”) and a soundtrack approach (cf. “Dein Glück)” to bring the album to its end.

+ + + : Melotron brings a work without real surprises, but they first of all confirm their writing skills as talented electro-pop band. Next to the main part of the album, which is clearly devoted to pure electro-pop music, they also bring a few more groovy cuts. Another noticeable element –which isn’t new at all, is the sensual character supporting this work. This album has something pretty ‘sex’-like and that’s a little extra I like when listening to music.

– – – : I have been never a huge fan of Melotron’s sweeter side, but luckily for me it’s not the main essence of this work.

Conclusion: “Für Alle” is a noticeable and styled return for Melotron, which will for sure ravish all their fans. This band remains a great electro-pop ambassador from the modern times although I can’t say it’s their best album to date… This album doesn’t feature new mega-hits such as “Tanz Mit Dem Teufel”, “Kindertraum”, “Dein Meister” ao.