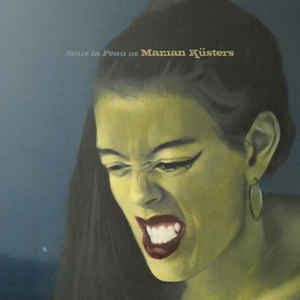 Background/Info: I never heard before of this French duo from Brest. They however released some digital stuff on the Colombian label Black Leather Records. Gaël Loison and Cyril Pansal, both are experienced artists who have joined hands with Unknown Pleasures Records to unleash their official debut CD featuring 16 tracks.

Content: The sound totally fits to the minimal approach of the label. Maman Küsters clearly moves throughout the wider fields of EBM, but with this little extra touch making the difference with the usual EBM standards. The sound is clearly inspired by 80s EBM formats like DAF, but there also is this typical and fascinating analogue creation making for the particularity of the work.

Some passages are exploring other sources of inspiration as well and I’m referring to a punk flavor and even psychedelic/experimental aspects. A few cuts have been reinforced by real bass and guitar playing. Some guest musicians joined in and I have to mention Franck Kartell and Pedro Peñas Robles as most familiar names.

Another particularity of this band is the use of mainly French lyrics dealing with totally weird themes. Maman Küsters are telling you little, crazy stories in a somewhat sterile and 80s approach.

The final cut of the album is a pretty cool remix accomplished by David Carretta.

– – – : The rare instrumental cuts are not adding a bonus to the work, but globally speaking there’s not much to improve!

Conclusion: “Sous La Peau De Maman Küsters” is a refreshing production based upon 80s EBM and achieved with a fine taste for sound treatments. This is an irresistible production.

Since you’re here … … we have a small favour to ask. More people are reading Side-Line Magazine than ever but advertising revenues across the media are falling fast. And unlike many news organisations, we haven’t put up a paywall – we want to keep our journalism as open as we can. So you can see why we need to ask for your help. Side-Line’s independent journalism takes a lot of time, money and hard work to produce. But we do it because we want to push the artists we like and who are equally fighting to survive. If everyone who reads our reporting, who likes it, helps fund it, our future would be much more secure. For as little as 5 US$, you can support Side-Line Magazine – and it only takes a minute. Thank you. The donations are safely powered by Paypal.
Tags: DAF, EBM, Maman Küsters