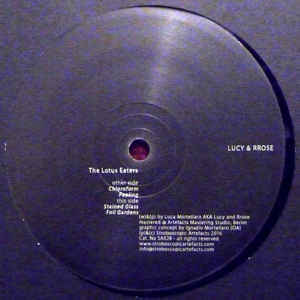 Background/Info: “The Lotus Eaters” resulted from the common efforts of Luca Mortellaro aka Lucy (Stroboscopic Artefacts owner) and techno-experimentalist Rrose (who last year also released split EP’s together with artists like Orphx and Kangding Ray). This 12” features 4 different tracks.

Content: This production is an invitation to explore the most unknown and less popular realms of techno music. It for sure is based upon technoid sources of inspiration, but the sound treatments quickly appear to be the main focus. From ambient atmospheres, which are progressively moving into rhythm while repetitive bleeping sequences join in, this work has less in common with the familiar techno music.

The techno format of Lucy & Rrose is not driven by pumping kicks, but is accentuated by impressive sonic manipulations and deep, vibrating sound waves.

+ + + : “The Lotus Eaters” fills the gap between traditional techno music and pure underground electronics. This is a dark and experimental production, which I think will be more praised by underground and especially experimental music lovers instead of teenagers dancing to big beats. This work is sophisticated and complex, but first of all revealing a further dimension of techno. Stroboscopic Artefacts is based in Berlin, which remains the sonic Mecca for this kind of avant-garde experiences.

– – – : The complexity and especially the experimentalism of the record makes it for sure less accessible for a wider audience although I guess that’s not the main purpose of both artists. Speaking for myself I’m not that much into the opening cut, but the other tracks are definitely more exciting.

Conclusion: Lucy & Rrose proves that techno music is still becoming darker, more sophisticated and definitely into underground. That’s why this kind of format becomes more accessible for industrial- and experimental fans as well.

Since you’re here … … we have a small favour to ask. More people are reading Side-Line Magazine than ever but advertising revenues across the media are falling fast. And unlike many news organisations, we haven’t put up a paywall – we want to keep our journalism as open as we can. So you can see why we need to ask for your help. Side-Line’s independent journalism takes a lot of time, money and hard work to produce. But we do it because we want to push the artists we like and who are equally fighting to survive. If everyone who reads our reporting, who likes it, helps fund it, our future would be much more secure. For as little as 5 US$, you can support Side-Line Magazine – and it only takes a minute. Thank you. The donations are safely powered by Paypal.
Tags: Berlin, Lucy & Rrose, Orphx