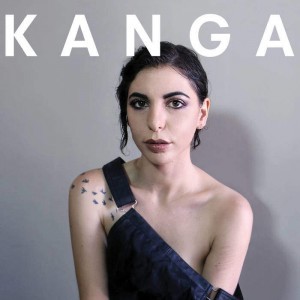 Background/Info: Kanga is a Los Angeles based female artist presenting her official debut album on Negative Gain Productions. She previously was involved in the composing of film music. The self-named debut album features 10 songs, which have been co-produced and mixed by Rhys Fulber.

Content: Kanga is a real hot discovery revealing a different dimension of pop music. She defines it as ‘heavy-pop’ while we also might speak about an industrial-pop format. There’s a contrast between the menacing bass lines and raw production of sounds on one side and a more sexy interpretation on the other side.

Kanga’s timbre of voice sometimes reminds me of Jennifer Parkin (Ayria) while her music is more unusual. I’m not sure this is the kind of music will appeal to traditional electro-pop lovers. The guitar playing injects a darker and industrial style as well.

+ + + : Kanga is not reinventing electro-pop music, but this artist clearly deals with a less traditional format. The raw and somewhat unpolished production totally fits with the harder pop approach, but still creates a delicious contrast with some sensual rhythmic parts and sweet, but charismatic vocal parts. Originality is cool, and when it finally results in several great songs I think we definitely might speak about a successful and sexy work.

– – – : I think it would be wrong considering Kanga as a real ‘pop’ artist. The style is hard to define, which makes the originality of the artist, but maybe a less accessible sound in comparison with ‘pure’ pop music.

Conclusion: Negative Gain Productions has a nose for atypical pop artists and Kanga definitely is a real new revelation in the genre. This is a strong and efficient antidote to all Depeche Mode-clones!