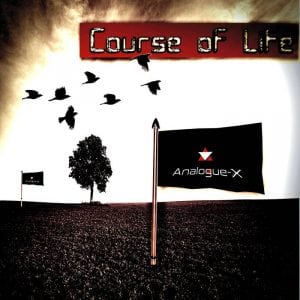 Background/Info: Analogue-X is a brand-new German synth-pop formation. Set up in 2017 by René Mußbach, Susan Mußbach and ALexis Voice, the trio has unleashed their debut album.

Content: Analogue-X clearly sounds inspired by electro-pop music and some songs are clearly evoking Depeche Mode ingredients. But Analogue-X is much more than emulating the greatest synth-pop formation in history. They also deal with a more commercial and danceable synth-pop format and also composes softer and into melancholia songs. There’s a kind of crossover between different electro-pop related influences.

+ + + : The album features 15 songs, which is a real opportunity to get familiar with the sound and influences of this band. I especially like the diversity featured at “Course Of Life”. They seem feeling comfortable composing ‘classical’ electro-pop, but still have a nose for dance-pop carried by heavy kicks. I’ve been impressed by the maturity of the songs and the elaborated composition process. This album doesn’t sound at all like a debut. Just pay attention for the way they built up their choruses, which are melodic and transcendental.

– – – : One of the few elements they really have to reconsider is the production of the vocals. The vocals aren’t bad at all, but I think they could have a little bit more passion.

Conclusion: This is a real successful debut album, which seems to get very positive reactions in Germany. That’s fully understandable and I think we better can keep this band in mind.