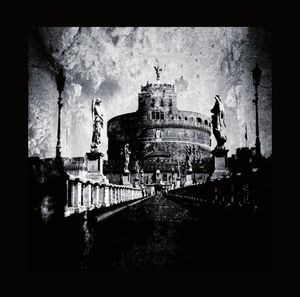 Content: Love In Cage is a French trio hailing from Rouen, which released a debut album “Position” back in 2011. They now signed to Trinity/Meidosem Records, which clearly is the appropriated label for their sound.

Love In Cage perfectly mixes guitar and electronics, which directly evoke the good-old new-wave decade. This is a pure old-school minded band, bringing souvenirs back to life. One of their main strengths probably hides in some of the choruses. You here can sing along with the band and I like this magic fusion between a band and the listener. It works well at the opening song “Christopher”. A few songs feature female backing vocals adding an extra volume to the work. The songs are sung in French and English.

There’re multiple noticeable tracks. Next to the aforementioned “Christopher” I also have to mention “Boy Next Door” for its great guitar playing and “Cut Up”, which evokes some New Order reminiscences for the electro sequences.

I also like the pure old-school “Automne Monotone” for its cool electronic effects, but the absolute attention grabber is “Short Film Camera”. This is a brilliant composition, which once more doesn’t bring any new element to this music genre, but it simply is a well-crafted piece of music. I like this cold and somewhat sterile mood emerging from the song while the male vocals and female backings create a delicious fusion.

Conclusion: Love In Cage is a band you really have to discover. This band is bringing new-wave music back to life in a fascinating way.

Since you’re here … … we have a small favour to ask. More people are reading Side-Line Magazine than ever but advertising revenues across the media are falling fast. And unlike many news organisations, we haven’t put up a paywall – we want to keep our journalism as open as we can. So you can see why we need to ask for your help. Side-Line’s independent journalism takes a lot of time, money and hard work to produce. But we do it because we want to push the artists we like and who are equally fighting to survive. If everyone who reads our reporting, who likes it, helps fund it, our future would be much more secure. For as little as 5 US$, you can support Side-Line Magazine – and it only takes a minute. Thank you. The donations are safely powered by Paypal.
Tags: Love In Cage