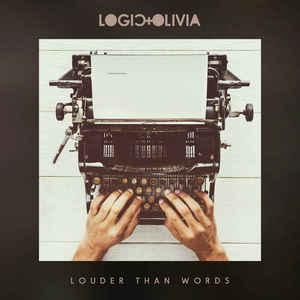 Background/Info: This is the fourth full length album for the German band Logic & Olivia. René Anke,
Kalle Vogel and Matthias Trompelt recently released the impressive EP “Night Of Despair” so I was really wondering how their new creation would sound like.

Content: Previous albums of this band didn’t really impress me, but as I already mentioned the song “Night Of Despair” made me curious. All songs aren’t comparable to “Night Of Despair”, but globally speaking this band improved the global production. They clearly deal with electro-pop with a more personal approach, avoiding this way the synth-pop clichés. The songs are well-crafted while the most noticeable cuts have been supported with cool melody lines and a refreshing sound production.

+ + + : I like electro-pop formations, which aren’t Depeche Mode clones. “Louder Than Words” is made with an own sound DNA, which is refreshing although not innovating. This formation gained in sophistication and has found the right formula to get songs danceable and melodious. Next to the remarkable “Night Of Despair”, the song “I Like” could be another EP-title song.

– – – : Next to a few cool songs the album also features a few forgettable cuts. I’m sometimes also missing passion in the vocals.

Conclusion: Logic & Olivia is not exactly what I would call a leading synth-pop formation, but this new opus is definitely their best work to date.