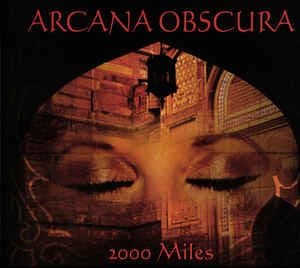 Background/Info: Arcana Obscura was set up in 1990 by Thomas Gäbhard. The band can look back at a respectable discography, but this new full length is the first ‘new’ studio album since the “Lemuria”-album (2010). Thomas Gäbhard, Timea Göghova, Andrea Bannert, Betty Baindl and Heike are now back on track unleashing their newest creation featuring several reworked (old) songs plus a few new cuts.

Content: Arcana Obscura always has composed a sound, which is somewhat different from the established standards. “2000 Miles” moves on this personal approach, mixing electronic treatments together with traditional instruments and great, ethereal vocals. The songs have something pretty ritual and transcendental-like, a bit Dead Can dance-like for the elevating sensation of the vocals, but darker and more industrial-like when it comes to the music. The last part of the work is absolutely impressive, like an ethereal opera coming together with hypnotic, mystic music.

+ + + : From a very personal point of view, I think “2000 Miles” is the most accomplished and best album to date by Arcana Obscura. It remains an electronic work mixed with industrial treatments, but it also is a very mystic-like work; a sonic path on, which ritual- and trance-minded influences are creating a delicious symbiosis with the phenomenal voice of Timea Göghova. The songs are moving from bombast into delicacy while some authentic instruments are recovering the work with a graceful flavor.

– – – : I noticed one single cut (cf. “Heaven And Hell”), which has nothing to do with the rest of the tracklist. It’s a song that feels lost in a poignant, mystic electro universe.

Conclusion: It’s quite strange to realize that a band, which is already been in business for such a long time has now –after a hiatus of several years, accomplished their best work to date.

Since you’re here … … we have a small favour to ask. More people are reading Side-Line Magazine than ever but advertising revenues across the media are falling fast. And unlike many news organisations, we haven’t put up a paywall – we want to keep our journalism as open as we can. So you can see why we need to ask for your help. Side-Line’s independent journalism takes a lot of time, money and hard work to produce. But we do it because we want to push the artists we like and who are equally fighting to survive. If everyone who reads our reporting, who likes it, helps fund it, our future would be much more secure. For as little as 5 US$, you can support Side-Line Magazine – and it only takes a minute. Thank you. The donations are safely powered by Paypal.
Tags: Arcana, Arcana Obscura