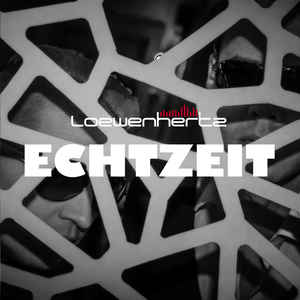 Background/Info: Alex Pfahler and Andy Pfiefer ever started with a synth-pop band called L’Image, but later on moved on as Loewenhertz. The debut album “Irgendwo In Deutschalnd” was released in 2014 on Echozone. It was a promising work inspired by bands like De/Vision, Distain and co.

Content: “Echtzeit” is the continuation of “Irgendwo In Deutschland”. The duo from Augsburg remains inspired by the synth-pop and melancholia of their famous compatriots of De/Vision. You can also hear it in the arrangements, the global atmosphere recovering the tracks and even the way of singing. The songs were sung in German and English language.

Most of the songs are pretty evasive, but there are a few harder cuts as well revealing some naughty sound treatments.

+ + + : Loewenhertz is one of the many synth-pop formations inspired by Depeche Mode and of course De/Vision. I’ve already heard cheap emulations, but “Echtzeit” makes sense! The songs are well-crafted and accomplished. This duo has found the right sonic elixir to compose efficient melancholic synth-pop music. I have a little preference for most of the songs sung in English (cf. “It’s Too Late”, “Winter Falls”). “It’s Too Late” sounds pretty Depeche Mode-like while “Winter Falls” sounds a bit harder while carried by a cool and somewhat guitar-like electro sound. “Thunder” is another cool cut in this genre.

– – – : The work features 10 songs plus 2 bonus cuts, which are just 2 more original songs sung in English. So I don’t really understand why they call them ‘bonus’ tracks. Anyway… even if both songs are sung in English and I prefer most of the English-sung cuts, the bonus tracks are not adding a real extra to the tracklist. I also noticed a few less inspired songs, but I’m afraid that’s what you’ll find on all productions.

Conclusion: Loewenhertz definitely belongs to the most talented number of contemporary synth-pop bands inspired by the true masters in the genre! Originality is far to find, but the songs are efficient.