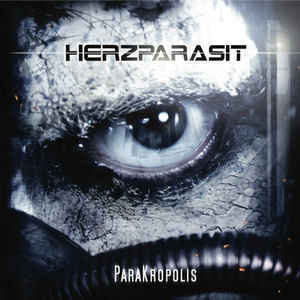 Background/Info: The German combo Herzparasit is back on track, unleashing their third full length album. The band has released a new album every three years thus far. “ParaKropolis” wants to be a reflection about our reality and more specifically about what’s going wrong.

Content: The look of Herzparasit is somewhat reminding me of Rammstein while the music is also quite comparable to the German master of metal. And Herzparasit clearly claims to be inspired by bands like Rammstein, Oomph, Eisbrecher and related formations.

The songs move in this truly German metal vein, which is carried by harsh, German vocals, dark and aggressive metal-like riffs and electronic arrangements. Some songs feel a bit like an emulation of Rammstein and I especially refer to “Manege Frei” reminding me of “Die Sonne”.

+ + + : No doubt about it, Herzparasit is a band that will find their success in their homeland. “ParaKropolis” is a credible metal-driven composition accomplished with great electronic treatments. The more they come closer to Rammstein, the more I like the songs. I already mentioned “Manege Frei”, but “Blut Lügt Nicht” is even better as an emulation while featuring an original touch with passages with children singing. This band has the look and an exciting metal sound!

– – – : Rammstein remains a major source of inspiration for many bands, but there’s only one Rammstein! That’s why the album rapidly sounds like a new and sometimes average copy of the Masters! I think the voice could have been a bit more powerful of a few cuts.

Conclusion: It’s when you’re listening to an album such as “ParaKropolis” that you realize the real impact Rammstein has on the German scene. Herzparasit is an honest and passionate clone in the genre, but I’m not sure this will be enough to conquer the international scene.