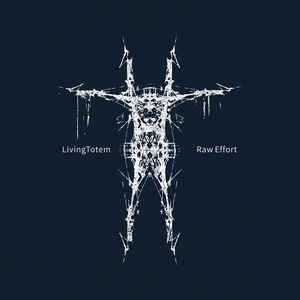 Background/Info: Hungarian artist András Gulyás is a rather familiar name active in the Hungarian underground fields, but it also is a man of multiple talents. He has been involved in different projects, switching from electro-pop (Quantum Cowboys) to darker industrial fields. LivingTotem released an album on Advoxya Records (2014) and now signed to Ant-zen to unleash this new opus.

Content: “Raw Effort” is a work that explores multiple influences. It’s definitely dark and somewhat experimental-like, but the mainly characterized by a minimal electronic approach. Quite progressively you’ll notice the sound intelligence emerging from the tracks leading towards IDM.

Some of the atmospheres are pretty anguished, but always driven by hard, bombastic and danceable rhythms. Some of the final cuts even become a bit trance-minded while spiced with psy-trance elements.

+ + + : “Raw Effort” is a terrific piece of work; the kind of album I expect when listening to IDM. But it’s not only IDM as LivingTotem moves beyond any label and music genre. “Raw Effort” became a kind of sonic fusion where every single influence and sound element will get its place, creating a compact entity. I like the bombast of the cadence and the intelligence of the sound treatments. This album is the result of a dense creative process.

– – – : I can imagine the versatile character of the production might be a bit confusing for some listeners. The album is constantly moving from one influence to another one and the psy-trance approach at the final track (composed together with Hungarian composer László Hortobágyi) is maybe not the most representative cut of this work.

Conclusion: LivingTotem doesn’t care about established music genres and cheap fashion trends, but simply sounds like having exorcised different music ideas in a dark, danceable and avant-garde like industrial opus!

Since you’re here … … we have a small favour to ask. More people are reading Side-Line Magazine than ever but advertising revenues across the media are falling fast. And unlike many news organisations, we haven’t put up a paywall – we want to keep our journalism as open as we can. So you can see why we need to ask for your help. Side-Line’s independent journalism takes a lot of time, money and hard work to produce. But we do it because we want to push the artists we like and who are equally fighting to survive. If everyone who reads our reporting, who likes it, helps fund it, our future would be much more secure. For as little as 5 US$, you can support Side-Line Magazine – and it only takes a minute. Thank you. The donations are safely powered by Paypal.
Tags: Living Totem