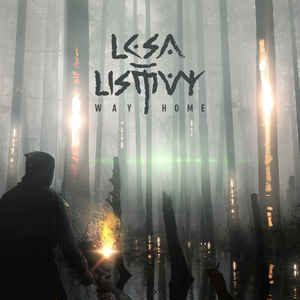 Background/Info: Lesa Listvy (Леса Листвы) is a Russian ambient collective featuring 4 members. After having self-released an album in 2017 they now joined hands with Cryo Chamber to unleash their official debut album. They’re inspired by Russian nature, but still by other subjects such as different lands and melancholic landscapes.

Content: “Way Home” is resonating somewhere in between pure cinematographic- and dark-ambient music. We’re rapidly moving towards obscure sounds, which now and then have something ritual. The work is accomplished by multiple little noises while they are also using slow rhythms and drones. The work is progressively evolving featuring subtle arrangements, echoing sounds and deep vibrations.

+ + + : “Way Home” is not a classical dark-ambient production and that’s precisely what I like. It has something very personal and I dare to say intimate, like an imaginary symbiosis between the musicians and the nature they’ve been inspired by. But it’s not a peaceful production as Lesa Listvy stands for darkness. I was impressed by the impressive sound and noise arsenal they’ve been using to accomplish this work. The title track is a pure masterpiece in the genre. The progression of this track is absolutely remarkable and revealing the great writing skills of the musicians.

– – – : I had to listen several times to the album to really get into it. It’s not exactly the most classical and I dare to say ‘easy’ music production so you have to be patient and simply let the music grown on you.

Conclusion: I can’t speak about an absolute successful production, but it’s a noticeable work with a real sensitive and intimate approach. Dark-ambient can be so much more than simply scaring listeners.