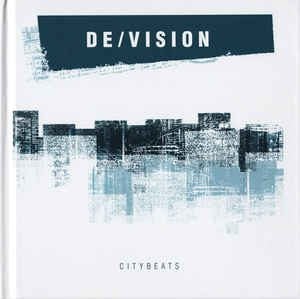 Background/Info: German duo Steffen Keth – Thomas Adam are back on track unleashing the 14th full length album from De/Vision. The band is a long-time leader of the alternative electro-pop scene and each new album is a special event for the legions of fans.

Content: De/Vision remains faithful to their successful sound formula. There’s no real need to innovate or explore new paths. “Citybeats” sounds in the purest tradition of the band: well-crafted and efficient electro-pop with this typical melancholic flavor on top. Several songs can be again related to Depeche Mode, but throughout the years the band also established a more personal and recognizable sound. Steffen Keth remains one of the best singers from the electro-pop genre and still is one of the main strengths of the work. A few cuts are a little less harder for the addition of guitar parts.

+ + + : De/Vision stands for a great sound and achieved compositions. “Citybeats” doesn’t sound that different and again reveals the impressive writing skills of this formation. The opening cuts are a tiny hesitant, but the already familiar “They Won’t Silence Us” appears to be the real take off. This is a great song followed by another impressive track (cf. “Not In My Nature”). The final part of the album reveals a few harder cuts and I want to tip “A Storm Is Rising” and “A Last Goodbye”.

– – – : De/Vision has accomplished the album the fans were waiting for. It sounds in the purest tradition of De/Vision and that’s maybe what I regret after all these years. There’s no real surprise so after a while it all starts to be predictable. The opening cuts are perfectly illustrating this kind of stagnation.

Conclusion: De/Vision remains a master formation in the electro-pop scene and simply confirms their endless talent. Some will affirm “Citybeats” is a masterpiece, but I think the magic is a bit gone and has been replaced by a déjà-vu effect.