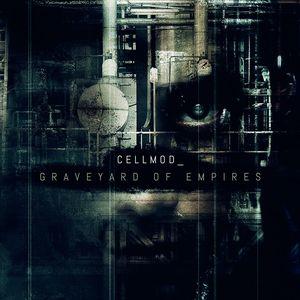 Background/Info: Cellmod is a band set up by Juan Espinosa and joined by guest singers. After having released previous albums on Sector 9 Studios, Cellmod joined hands with Infacted Recordings to unleash its 4th opus.

Content: “Graveyard Of Empires” is one of the most diverses albums I have ever heard. It’s not only because of the many guest vocalists –featuring Pete Crane (Shiv-R), Alex Matheu & Rashree Matson (Negative Format), Jared Lambert (Ien Oblique), Raziel Panic (You Shriek) ao, but also because of the eclectic electro approach featuring different influences. Notice by the way that the bands featuring the guest vocalists have previously remixed Cellmod.

The songs move from glitch-pop to beautiful reverie pop to somewhat electro-dance reminding me of Delerium to a kind of mix between dance- & film music, to heavier techno-industrial, and even industrial hip-hop songs. Every single song sounds like a new exploration in sound featuring a different vocalist. It’s totally weird, but I can assure you that it’s pretty well-crafted and efficient.

+ + + : The diversity of the album and its guest singers keep the listener in constant fascination. I have a little preference for the somewhat harder cuts and especially the instrumental title song and the one featuring Pete Crane.

– – – : “Graveyard Empires” sounds pretty ‘compilation-like’ and not really like a compact entity.

Conclusion: “Graveyard Of Empires” is an album that will definitely take you by surprise revealing several cool and achieved songs.