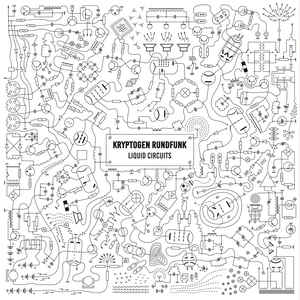 Background/Info: Kryptogen Rundfunk is a Russian solo project driven by Zhelezobeton-founder Artyom Ostapchuk. He’s also involved in other projects such as Hattifnatter, Govorit Radio Kosmos and Lunar Abyss. “Liquid Circuits” is the second complete album by Kryptogen Rundfunk, which also is the first ones since “22.SZ” (2004).

Content: The sound universe of Kryptogen Rundfunk moves in between industrial music and experimental soundscapes. It sounds pretty ambient-like while revealing a passion for analogue sound treatments. The tracks are supported with overwhelming, cold atmospheres and heavy sound blasts. The tracks have been accomplished by numerous field recordings (or samplings), which sometimes creates an impression of improvisation.

+ + + : “Liquid Circuits” reveals an impressive arsenal of sounds and noises. This artist likes decomposing and recomposing sounds. It creates a kind of noise-scape weaved into mysterious atmospheres. “Iridescence” is a great cut in the genre. The opening piece is another attention grabber, which also accentuates the ambient character of the work giving the impression of moving into a surreal- and somewhat abandoned imaginary world.

– – – : The somewhat improvised aspect of the work is not exactly my favorite and that’s why “Liquid Circuits” will be more pleasing to real experimental lovers in search of improvisation.

Conclusion: Kryptogen Rundfunk is a kind of sonic anatomy exploring a wide range of electronic sounds and noises.