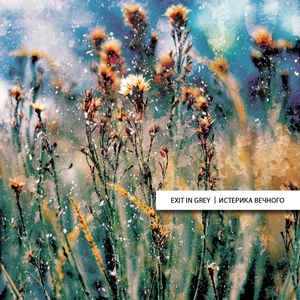 Background/Info: Russian music project Exit In Grey started as a duo, but got reduced to a one-man project driven by Sergey Suhovik. The formation released an impressive number of productions since 2004. This newest opus was originally written in 2011, but it took 5 more years to get mastered and ready to launch.

Content: “Hysterics Of The Eternal” is made of 2 long duration pieces, which each like a soundscape, feature field recordings, radio noises, electronic treatments, guitar and transformed voices. Both tracks are rather monotonous, but the dark atmosphere injects a chilling sensation to the work.

This is a production with certain visual appeal bringing you to a fictive universe of lost corridors and spooky places. The second cut sounds more cinematographic-like.

+ + + : I especially like the global sound concept of this work. There’s an interesting twist between all of the sound sources, which have been all manipulated and transformed to create a strange and obscure sonic texture. The vocals accentuate the spooky aspect of the work. I personally prefer the first cut, which is a bit more elaborate and moves through different passages.

– – – : This is the kind of abstract sound treatment, which will appeal to a very restricted number of music lovers. The second cut is more monotonous and would be really appreciated when joined by a visual creation.

Conclusion: “Hysterics Of The Eternal” is not exactly setting the world alight. It’s an easy listening production without a real highlight.