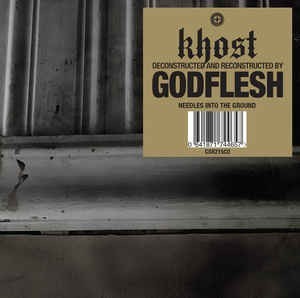 Background/Info: This is a very special work by Justin Broadrick (Godflesh). He totally reworked the last year released album of Khost entitled “Corrosive Shroud”. I guess there are many links between both artists. They’re both hailing from Birmingham (UK) and already played at the same concerts. This is the first Godflesh album that has been released on Cold Spring, which is for sure because of the original Khost-album. Three tracks from “Corrosive Shroud” have been taken while Khost composed an extra cut for this Godflesh work that has been exposed to the sonic treatments of Broadrick.

Content: The work starts pretty industrial-like revealing crashing noises and drones. Quite progressively Godflesh moves towards harder treatments supported with dark and anxious atmospheres plus some ghost-like vocals. Justin Broadrick finally joins a real power-noise inspired sound on, which he added some guitars.

The ‘new’ song entitled “Deathsset” doesn’t sound much different, but totally fits with the global progression running through this work and the familiar Godflesh sound.

+ + + : The work stands for an impressive noise canvas that has been progressively built up until reaching a climax. Godflesh stands for an extreme sonic experience although it’s quite accessible because he can’t be totally labeled as one music genre. There’s a great symbiosis between the industrial ingredients and the great, arsenal of noises. This is a particular release and I can imagine a real privilege for Khost to see Godflesh reworking some of their own stuff.

– – – : I regret there aren’t more songs off the Khost-album that have been reworked into the Godflesh sound formula.

Conclusion: More original than remixes and definitely more creative than cover versions, “Needles Into The Ground” became a kind of sonic surgery transforming the original piece into a new industrial and noise texture.

Best songs: “A Shadow On The Wound”, “Inversion”.