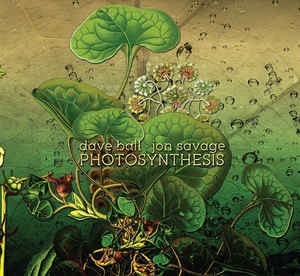 Background/Info: Behind this collaboration is hiding Dave Ball (Soft Cell, The Grid ao). ‘Sitting in the garden surrounded by trees and plants on a sunny day, the idea of organisms using sunlight to synthesise nutrients from CO2 and water became an inspiration to us. This idea, juxtaposed with mankind’s destruction of the planet through pollution and war gave us the inspiration to compose this soundscape.’

Content: “Photosynthesis” invites the listeners to join in for a dark-ambient voyage throughout a fantasy world. It’s a dark sonic trip realized with sharp sound waves and freaky astral atmospheres. You’ll notice electronic sequences running throughout the tracks joined by minimalistic treatments. The work sounds mysterious, sometimes pretty spooky and finally giving you the impression of walking throughout a glasshouse.

The work is pretty elaborated with numerous sonic manipulations and different noises plus samplings and/or field recordings. The final track reveals different sounds from nature, which reinforce the link with the concept and title of the album.

+ + + : This is not the classical kind of dark-ambient record. It’s much more diversified because of an impressive sound canvas and the magic of good-old analog gear. I like the progressive move from icy and mysterious passages towards a more dreamy and prosper universe. This is a work with a great visual strength. Last, but not least I also like the artwork of the (digipak) album.

– – – : This work is not the most typical dark-ambient release in the genre, but can we really speak about one specific music genre?! Dave Ball & Jon Savage don’t make any compromises and don’t really belong to an established style. They’re just exorcizing their own ideas, which for sure are related with different styles of music so in the end it’s not easy to define their sound as one particular style.

Conclusion: “Photosynthesis” has got a sound and it definitely appears to be a delicious, but tormenting experience.