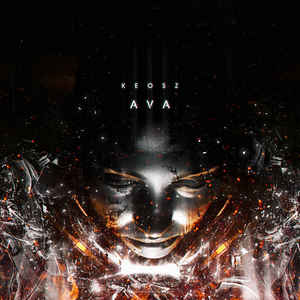 Background/Info: Slovakian artist Erik Osvald last year released the promising album “Be Left To Oneself”. The work was pretty soundscape-minded, featuring captivating ethereal chants. I was really wondering how this new work would sound.

Content: “Ava” doesn’t really move on where the previous work stopped. It’s a different experiment and a new approach, which is more focused on dark astral sound treatments. The tracks are supported with a freaky atmosphere and yet the sound rapidly becomes relaxing. There’s a slow progression in the song structures, which is accomplished with multiple field recordings (and/or samplings). The buzzing sound waves become intriguing when symbolizing an imaginary state of loneliness. A few cuts feature some guitar experimentation, injecting some diversity to the global sphere hanging over this work.

+ + + : Keosz seems to be an artist who’s not repeating himself and that’s an aspect I really appreciate. “Ava” is not exactly the kind of work I expected although this new ambient exploration has been accomplished with cool electro-sound treatments. Erik Osvald likes to experiment with sounds and noises, but he also creates a poignant atmosphere of desolation. “Ava” is a work mixing dark spheres and electronic treatments and that’s for sure the main difference with the traditional dark-ambient releases.

– – – : I like the progression of the tracklist until the few cuts that feature explicit guitar experiments. It’s not that bad and adding diversity to the work, but it can’t convince me the same way as the opening cuts.

Conclusion: Keosz mixes different ambient elements together, but remains driven and inspired by a dark spirit. I like this dark approach, reminding me of solitude and isolation.

Best songs: “nothing Left But Gloom”, “Ava”, “Acquitted From Illness”.

Since you’re here … … we have a small favour to ask. More people are reading Side-Line Magazine than ever but advertising revenues across the media are falling fast. And unlike many news organisations, we haven’t put up a paywall – we want to keep our journalism as open as we can. So you can see why we need to ask for your help. Side-Line’s independent journalism takes a lot of time, money and hard work to produce. But we do it because we want to push the artists we like and who are equally fighting to survive. If everyone who reads our reporting, who likes it, helps fund it, our future would be much more secure. For as little as 5 US$, you can support Side-Line Magazine – and it only takes a minute. Thank you. The donations are safely powered by Paypal.
Tags: Keosz