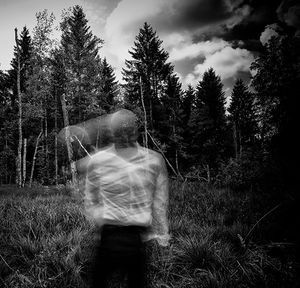 Content: Bruno Laborde is a French artist who maybe doesn’t make ring a bell. Fans of electronic music will for sure remember great French bands like Axonal Warfare and Neon Cage Experiment, which both are projects Laborde got involved in. He finally set up his own solo-project releasing a debut album (cf. “Inward Structures”) on the great Canadian label Tympanik Audio.

Four years have passed and Normotone is finally back on track unleashing a new album of 12 songs. “Hiraeth” has been released by Unknown Pleasures Records, which clearly reveals to be a label with an open-minded vision. This album is not exactly the most accessible piece of music although a creative outburst of a musician exorcising multiple sonic ideas.

I think we can easily speak about an experimental approach especially because of the multiple influences. It all starts a rather ambient-like way constructed with overwhelming sound blasts. It next moves into a more industrial approach carried by bombastic rhythms and ghost-like vocals. The work sounds mysterious and that’s an essential element, which is also noticeable in the vocal parts.

Different guest artists contributed to this album. Corina Nenuphar is one among the list and she sings with her sexy timbre of voice to the ambient-industrial driven “Sickest Truth”, which is one of the main attention grabbers of the album. This artist also contributed to some work of Black Egg, which is another band Laborde got involved in and, which contributed to “Hiraeth” as well. It’s such a small world…

Another main influence running through this album is neo-folk music. This music genre can be heard in different songs and I here especially recommend “The Surollen Silences”, which has been empowered by some industrial elements as well.

But the best is yet to come. I here refer to ambient driven cuts like “Abandon” featuring Sonic Area and the more soundtrack-inspired “From The Mouth To The Heart”. The last mentioned song makes me think of a song composed for a visual performance while its experimental approach reminds me a bit to the newest solo-album of Phil Von.

The last few songs explore new experimental paths, which have been mixed with industrial- and neo-folk music. “Personal Predatories” even moves on the edge of glitch, which simply confirms the eclectic approach of this band.

Conclusion: The diversity of “Hiraeth” for sure appears to be its most exciting element. This artist is maybe covering too many influences, which makes it hard to qualify Normotone as one established music genre.

Best songs: “Abandon”,” From The Mouth to The Earth”, “Procession Grotesque”, “Sickest Truth”.