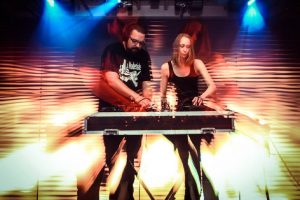 ‘Kaibun’ is a Japanese word, which means ‘palindrome’. The word or phrase can be read in both directions as ‘lepers repel’. For the Belgian duo Laurent Delogne and Marie Hubart, the word ‘Kaibun’ is a simple way to describe their music. Laurent says ‘you can listen to a piece through the prism of Marie and in another sense feel it under the influence that I bring to it’. While you probably know Laurent Delogne as the man behind the hard industrial project Le Moderniste, Kaibun sounds different; more into experimentalism and sound research. The explanation is maybe because of Marie’s classical musical training, bringing harmonization in the sound and an achievement in the melodies originally written by Laurent. Kaibun has released their second full length “Gloomy Alice And Sinister Jack” on Hands so I thought it could be a good idea to know a bit more about this project.

Q: Laurent, we all know you as the ‘operator’ behind the industrial music project Le Moderniste, but what does Kaibun stands for in terms of artistic expression, influences etc?

Laurent: A cure? Le Moderniste has always be a painful introspection. Truly. It happened that the album was missed… a pure shit… corrected… to not send people too many nauseous pathos. But Le Moderniste is oozing from my pessimistic psyche. And the further sound will be uncensored… I release a limited cassette format in September on Italian label Infidel Bodies. The work that requires such a project empties me of all energy and plunges me into a chasm… And I sincerely thank Infidel Bodies and especially Marika for giving me total freedom and wholehearted support in the creation of “Imbalsamazione”!

So Kaibun is a cure for my chronic depression and black ideas. It is not an introspection but a true catharsis.

Q: The title of the new work is quite funny and still intriguing, referring to you and Marie Hubart. What does “Gloomy Alice And Sinister Jack” really stands for?

Laurent: The first album was written under the patronymics of ‘Frigid Girl’ and ‘Mister Freeze’, which also was the name of our electro (minimal electro-clash) project of the early 2000s. And “Illogism” was a souvenir of the festive years in the world of techno, electro, acid and hardcore. “Gloomy Alice And Sinister Jack” are our surnames and the name of the album… a reminiscence of the past or not?

Q: Sorry guys, but the titles of your tracks are nearly impossible to keep in mind, but here again I’m fascinated. Is there any deeper content or maybe a concept behind the titles, which seem a bit like little stories?

Laurent: The concept of the album came to us as a plain phantasm. A film… we would be the directors of our own film. A film of pure love… and impurity comes from the outside world so it would be a closed vision. Pure love can only end (or exist) through death and Romeo and Juliet are the most tangible representation of it. We have therefore created a closed-door meeting full of love and death where both heroes are in fact only modern Romeo and Juliet. The titles and music illustrate a scene that is played in front of you, on the screen of your imagination.

Q: Tell us a bit more now about the composition of this new work, which by the way has been released four years after “Illogism”? What kind of album and sound did you want to accomplish?

Laurent: 4 years… Time goes by and a night we were drinking a glass while listening to Serge Gainsbourg and more particularly the song “Variations On Marilou” and the album “L’homme A Tête De Chou”. It was obvious, a revelation… musically we wanted to extrapolate the genius of Gainsbourg and make it accessible to us… We want to capture the feeling… A few chords, a theme emerges and all the melodies arise from the theme. We wrote the album as an original soundtrack. In fact, the album is very influenced by Gainsbourg… It may not be apparent at the first listening but if you are very careful, you will hear it.

Q: Compared to “Illogism” I experienced the new tracks as more elaborated, like reflecting a real ‘sound intelligence’. How would you analyze the evolution from the first album towards “Gloomy Alice And Sinister Jack”?

Laurent: “Illogism” was a funny thing to do…  There’s no intelligence behind “Illogism”. We drank and dance more than to create music… it’s just energy… a one shot impossible to create again…

As I already said the new one is created with reflection. There’s also a great part giving to sound. We use a lot of samples recorded for the percussions. And we created synthesizers sounds with Absynth from samples of… Gainsbourg. We also used a multitude of bodies samples that we recorded both in the spirit of the album and manipulated to blend into the melodies. With this album, we wanted to create something more accomplished in terms of experience for the listener. We did not want a music that was too improvised, too spontaneous, but instead we wanted a more reflective sound, that can be more experimental in its structure and also less easy to access.

Laurent: If you read the sentence, you’’ll see an advertising quote… As Andy Warhol used of advertising. It’s the pop artistic vision of our music…

‘Bastard electronic music’… Yes, we make ‘BEM’… thanks to you to find it! What it means… In fact that we totally don’t care on how our sound is named, name it as you want, we don’t care. We mix so many influences… In the new one, I think we touch pop music, industrial, classical, noise, techno, house etc… the list is longer and it’s why we love working on Kaibun!