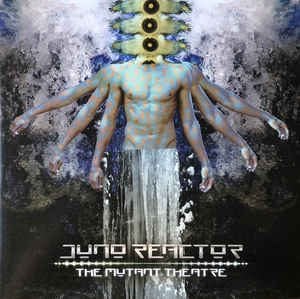 Background/Info: Juno Reactor is back on track with a new opus. Ben Watkins is often considered as the symbolic Godfather of psy-trance although throughout the years he clearly diversified his music with other influences. It brought him to compose music for movies and even real famous ones such as “The Matrix”. But Juno Reactor always has been a visual act and that’s precisely what has inspired this new work. Juno Reactor and the Mutant Theatre collective also is ‘an interactive live show, where theatre, dance, live music, wifi control L.E.D. costumes, gas guns, ray guns, confetti guns en-trance the audience into a fantasy world of adrenaline fuelled dreams, hardwired adventure, a Sci-Fi invasion of the mind and body’.

Content: I noticed this album is the tenth official studio album of Juno Reactor. If the number ten also is the number symbolizing ‘perfection’, I never believed there’s something like perfection instead of getting close to it. That’s precisely what this album is all about.

Ben Watkins joined hands with good-old contributors Xavier Morel and Johann Bley while he also invited several female guest vocalists. The music remains pretty Juno Reactor-like, which means driven by impressive, deep resonating bass lines, trance rhythms, psychedelic tones, tribal percussion arrangements, ethnic chants and cinematographic passages. Watkins seems to have mixed some of the most essential Juno Reactor ingredients from the past with his soundtrack approach. He also moved back to some of his most famous hits “Pistolero” and has accomplished a kind of follow-up entitled “Return Of The Pistolero”.

+ + + : This album shows Ben Watkins and his acolytes at their best. The global sound production remains pure high-tech. I’m still feeling a pure sonic orgasm when focalizing on the bass lines while the hypnotic drums and congas lead me into trance! But that’s only the beginning of the voyage, as the different vocalists are absolutely amazing. Add to this some ethnic/Indian chants and you just can have an idea what “The Mutant Theatre” is all about. The album reveals numerous highlights, but I’ve to mention “Dakota” for its great tribal and transcendental feeling and “Return Of The Pistolero” for the magnificent Spanish-like guitar play. Watkins remains a truly genius and even if “Bible Of Dreams” remains an absolute masterpiece, this new opus is one more brilliant evidence of the man’s immense and endless talent.

– – – : I was a little less convinced by the more cinematographic pieces, which are sometimes a bit experimental as well.

Conclusion: “The Mutant Theatre” is an album without real huge surprises, but definitely an opus that will be pleased by the fans of the band. Respect to Ben Watkins!