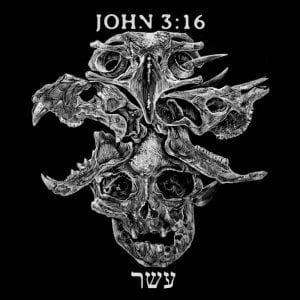 Background/Info: Philippe Gerber is now active for 10 years under the John 3:16 moniker. Time to celebrate a  decade that has featured multiple releases (mainly on Alrealon Musique). And for this occasion John 3:16 did a fine selection of B-side and unreleased songs. The CD format features 12 songs while the digital release gets 17 extra songs.

Content: John 3:16 is a particular experience in sound. It’s nearly impossible defining the sound of Philippe Gerber. It’s more the result of multiple influences that have been merged together. The main characteristic is the very specific atmosphere recovering the tracks. It has something ambient-like, but still a bit dark and definitely mysterious. It makes me think entering an imaginary sonic labyrinth. Guitar remains an essential instrument in the composition of the songs, but here again it all sounds atypical creating an experimental- and apocalyptic impression.

+ + + : I like this overwhelming mood running through the work of John 3:16 and it’s not that different for the B-sides and unreleased songs. This is much more than simply B-sides. It’s a well-crafted work, which sounds intimate and somewhat modest. The tracks have been progressively built up reaching this unique apocalyptic vision, which can be also replaced by pure psychedelic passages.

– – – : From a very personal point of view I would like to hear now and then some vocal parts. I think it could inject some diversity although the result would be not the same.

Conclusion: There’s no better present to celebrate a band’s anniversary by seeing the main protagonist releasing rare and/or previously unreleased material. But John 3:16 also is a project with a very unique sound and approach. That’s the difference between creative musicians and copyists.