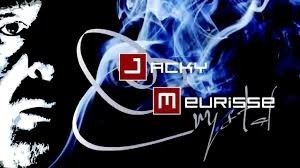 Content: Jacky Meurisse is an artist who entered into the collective memory for being a real pioneer in (the Belgian) EBM and a successful pioneer in different new-beat projects as well. From Signal Aout 42 to Amnesia and Pleasure Game to remember some of his biggest underground and new-beat projects, it looks like Meurisse is progressively getting back to pure underground electronics.

The last Signal Aout 42-album (cf. “Inspiration”) was already a great opus while the recently released debut-work by Grand((Ø))Signal (a project between Jacky Meurisse and Grandchaos) simply sounds like an EBM-assault. “Crystal” was introduced as a mix between new-beat, techno music and EBM so I was really wondering what this creative mind had to offer.

“Crystal” takes off a cool body-techno way, which clearly indicates the sound approach and influences on this work. “Century Of Love” coming next moves in a similar way while you also will notice some carrying vocals. Both songs are cool and totally danceable, but just teasers for what’s to come.

The title song is a first highlight for its exciting mix of EBM and groovy loops. Jacky Meurisse’s grave timbre of voice adds a somewhat dark touch. He sings in a half spoken half sung way, which perfectly matches with the music. “Diskoteka” reveals some vintage electro elements while some old-school techno tricks have been used as well. It’s not exactly the most original song of this artist, but the songs kicks a** and makes sense. The main particularity of the track is the kind of electro-trumpet like sound that has been used. This is for sure a track that will appeal for all lovers of good-old EBM and new-beat.

“Groovy Style” sounds terrific. This is also the darkest cut of the work and moves into pure EBM. The sound treatments running through this song are simply amazing, and reminds us that we’re listening to a real master in electronic underground music. There’s a dark sequence running through this cut reminding me a bit of early Vomito Negro.

Among the three songs left I also have to mention “Never Say No Nomore” and “No Pity For The Killers.” We again move in between old techno formulas (like the somewhat old-fashioned screams) and pure EBM with funny sampling parts.

The production of the vocals also is a quite noticeable element of this work. The vocals have been more used as an effect while remaining rudimentary although essential.

Conclusion: “Crystal” is somewhat like a look back to the ‘sources’ of EBM while accomplished by old-school techno and new-beat elements. It all together creates an efficient and refreshing work. Respect Mr. Meurisse!