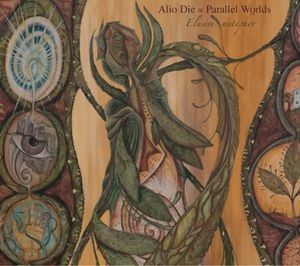 Content: Alio Die (Stefano Musso) and Parallel Worlds (Bakis Sirros) are both established artists active in the wider fields of ambient and experimental music. Stefano Musso always has liked to set up projects with other artists. He collaborated with an impressive number of artists like Robert Rich, Vidna Obmana, Nick Parkin, Antonio Testa ao. He has also already released an album (cf. “Circo Divino”) together with Bakis Sirros in 2010 and now strikes back with a new opus.

It seems to have taken 3 years to achieve this work, which features 7 songs. “Elusive Metaphor” seems to mainly focus on multiple sound treatments and manipulations. It often sounds like a sound has to be decomposed and treated to get a new and unique ‘sound.’ That’s the experimental approach of both artists, but the difference with other ‘experimentalists’ is that it also resulted in a real composition. This album clearly appeals to lovers of ambient music.

From start on you directly notice the dark and mysterious sound atmospheres. “Unspoken Shapes” is an overwhelming debut, which is totally achieved by the addition of ethereal female vocals. I like the progression of this cut, which also reveals multiple field recordings. I can’t say if it’s really a pity there are no more vocals on this work, but the idea of vocal input is quite successful.

The album remains mysterious and intriguing, and I was also impressed by the refined approach illustrated by little bleeps and other subtle sound arrangements. “Elusive Metaphor” is a real polished work, which is not that usual for experimental productions. Stefano Musso and Bakis Sirros patch sounds while taking care to create a meaningful result. This comes through in great ambient atmospheres with a strong visual appeal. I recommend the cellar-like atmospheres emerging on, “Dissolved Heaven” and the anguishing vibe hanging over, “Roundabout Mirages.” The last song is carried by a kind of low cadence, which makes it even more accessible.

Both artists have used an impressive arsenal of material to accomplish their work and the least I can say is that you can feel the passion and creativity coming through.

Conclusion: There’s a real chemistry between Alio Die and Parallel Worlds, which consists of how to transform experimental treatments into a fascinating dark-ambient minded work.