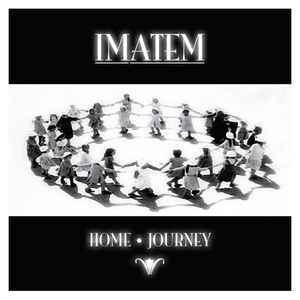 Background/Info: Peter Spilles needs no real introduction, and will always be remembered as the front man of Project Pitchfork. But next to his main band he got also involved in other projects like Aurora Sutra, Santa Hates You and Imatem. This double album is a remastered edition of the albums “Journey” and “Home” originally released at Candyland Entertainment (2007) and Prussia Records (2008).

Content: “Home” reveals similarities with Project Pitchfork, but the production is globally speaking less powerful. It all sounds like these songs couldn’t have been released under the Project Pitchfork moniker. They clearly express another side of Spilles, which he adapted into Imatem. “Home” sounds like an artist exorcizing multiple influences, which he transposed into a mix of electro-rock, EBM and dark-pop.

Peter’s typical timbre of voice is easily recognizable although he sings a softer and clearer way. The beautiful synth lines are one of the main common points with Project Pitchfork. A few songs feature the contribution of guest singers and I especially have to mention Der Graf (Unheilig) as one of the main protagonists.

The album is more into diversity –and not only because of the guest singers, revealing a mixture of electro-wave, dark-pop and real evasive electronic passages. Sound-wise this album comes closer to Project Pitchfork and it’s fascinating to see the fusion of the sound with great singers with a particular timbre of voice like Ronan Harris, Jay Smith, Jinxy and Sara Noxx.

+ + + : It’s a nice experience to (re)discover Imatem’s albums on one disc. The “Journey”-album is a somewhat forgotten treasure featuring some cool songs. Imatem stands for great synth lines and danceable dark-pop parts.

– – – : I was really surprised to rediscover the “Home”-album, which sounds a bit affected by the weight of time. It’s not bad at all, but it sometimes sounds like a cheap emulation of Project Pitchfork without power and less spirit.

Conclusion: This double disc is a cool gift for the biggest fans of Peter Spilles, but I regret there’s not one exclusive song.