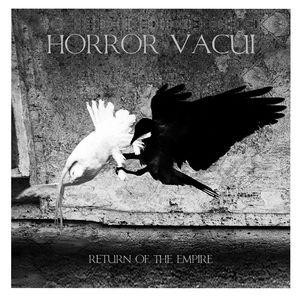 Content: Horror Vacui gained some international recognition with their debut album “In Darkness You Will Feel Alright”. The new work “Return Of The Empire” was first released at the end 2014 by Horror Pain Gore Death in a CD format and has been now released by Avant! Records as vinyl.

I was not that familiar with this band. The first album revealed some interesting and pure retro new-wave ideas, but the new work has been a real revelation!

From the very first notes you clearly notice the pure and explicit guitar-wave style reminding me of legendary formations like The Cult, The Fields Of The Nephilim and The Skeletal Family. The sound is a faithful and totally accomplished emulation of the great new-wave sound. You get the typical and really genius guitar parts mixed with the dark and deep haunting bass lines and furious drum sections. The dynamic of the drum parts is the main link with The Skeletal Family. On top of it all you’ll hear the enraged vocals of singer ‘The Sheriff O’. Music and vocals are in perfect harmony, evoking the dark side of life.

Horror Vacui clearly avoids any innovation, but are talented and devoted ‘pupils’ of the 80s movement. I really would have sworn that I went back in time, awakening in an obscure little club during the 80s with Horror Vacui on stage. The sound has the true spirit of the new-wave music while I was impressed by the enraged cadence and brilliant guitar work. “Return Of The Empire” features a succession of furious songs and a few potential hits like “Light Of Darkness” and “Opus Tenebris”. I was not always a ‘fan’ of Italian Goth formations, but Horror Vacui is one of the few exceptions to the rule.

I noticed an impressive improvement in the global production, which sometimes was a little bit hesitant on their debut work. This album reflects maturity and self-confidence in the writing process. The sound becomes harder and sometimes moves on the edge of post-punk. “Return Of The Empire” sounds like a whirlwind without any mercy.

Conclusion: “Return Of The Empire” is a successful recording revealing a genius copy of good-old new-wave music.