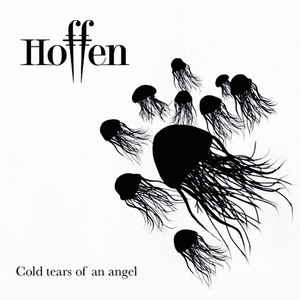 Background/Info: Hoffen is a Mexican band set up by Dali Lantzeta (who was previously involved with other formations). “Cold Tears Of An Angel” is the official debut album of Hoffen, which has been released in collaboration with Mexican label Sector Industrial Producciones (run by Dimitri Berzerk) and Abstrakt Muzak in the USA.

Content: I will not take you that long to notice the 80s inspiration running through this work. Some songs might remind you of The Cure and Trisomie 21. The songs have been accentuated by melancholia and dark atmospheres. The vocals are pretty sterile, reinforcing the 80s approach. The songs have been sung in English, but you also will discover cuts sung in Spanish.

The last song is a remix by Dimitri Berzerk injecting a huge dose of electronics to the original version.

+ + + : I was rather convinced by this 80s emulation and especially the great guitar playing was worthy of examination. The fuzzy guitar playing running through “Two Headed Hydra” is absolutely great. The songs are supported by beautiful melancholia although I prefer the harder passages from the tracklist. The vocals reveal less emotion and that’s another cool aspect reminding me of the cold approach of 80s new/cold-wave music. The remix by Dimitri Berzerk has less in common with the sound of this album, but it’s a great song.

– – – : Even if I like the way of singing I also think it’s the main aspect of the production that needs to be improved. Some vocal parts can’t totally convince, revealing some hesitation.

Conclusion: I can’t say to have heard an essential production in the post new-wave and cold-wave music, but Hoffen is an interesting formation having accomplished a promising debut.