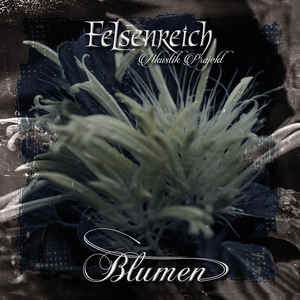 Background/Info: The Chemnitz based collective Felsenreich has already released a number of albums on labels such as Expander Records, Black Rain and Danse Macabre. The goth-rock formation breaks the silence with this new and somewhat conceptual opus, which has been announced as ‘Akustik Projekt’.

Content: The rock approach is still noticeable, but the acoustic composition awakens different influences. “Blumen” became an evasive piece of music, pretty relaxing and revealing a kind of beautiful melancholia. The songs are carried by acoustic guitar playing and impressive piano/keyboard parts. The male- and especially female vocals inject an extra ethereal dimension to the album.

+ + + : “Blumen” definitely stands for the most intimate- and authentic work of Felsenreich. I don’t know if it’s just a kind of ‘one shot’ release, but the band definitely reveals great composing skills in this kind of music. The vocals also have a great impact on the global production, sometimes creating an elevating effect. This album is a delicate composition featuring a few outstanding songs, but I especially want to tip “Tales Of The Night”.

– – – : A few cuts are less inspired, but that’s often happening on most releases. I think this album could have been even more authentic by the addition of extra acoustic instruments.

Conclusion: “Blumen” sounds like an invitation to join a world of sonic reverie and magic; just listen to the music, which sounds as a sweet dream.