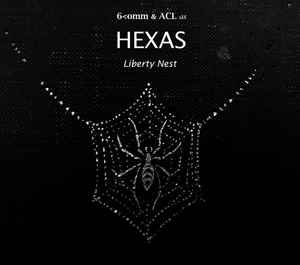 Background/Info: Patrick Leragas (6Comm) and Gaya Donagio (AntiChildLleague) joined hands to release this album –which rather looks as a mini-album, under the Hexas moniker. The work features 6 cuts.

Content: The industrial influence comes rapidly through in the percussion and raw sound treatments, but there also is a dark sound atmosphere hanging over the work. Both opening cuts are into bombast and a kind of apocalyptic-rock approach. Quite progressively Hexas walks at a different path becoming frightening and ritual like. The spoken vocals of Gaya Donagio have something bewitching while on other cuts you can feel rage and passion. The sound remains pretty industrial, but accentuated by an intriguing ritual atmosphere.

+ + + :  I like the bombast band and industrial exposure of this work. The dark sphere hanging over the tracks creates a magic match with the ritual elements. “Liberty Nest” becomes a mysterious piece of music dominated by haunting vocals and obscure sound treatments. I especially like this ritual element reaching a truly climax at “Helborn” and “Art Demands War”. Patrick Leagas hasn’t lost his nose for transcendental compositions.

– – – : Both opening cuts left me a bit skeptical like revealing a hesitating composition without real magic or chemistry between both protagonists.

Conclusion: Hexas features a poignant debut, which I hope will get a successor. This is the perfect match between industrial- and ritual music.