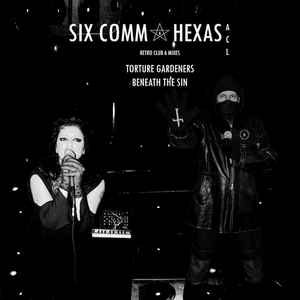 Background/Info: This 7” is a split release between Six Comm and Hexas. While Six Comm, the project of Patrick Leagas, doesn’t need a further introduction, Hexas is a new project I recently discovered by the “Liberty nest”-release. Hexas is featuring Patrick Leagas and Gaya Donadio (AntiChildLeague).

Content: Six Comm totally reworked the famous “Torture Garden”-song from Death In June. It became a somewhat ritual and extremely dark version getting the listener into a possible state of trance. Leagas’ growling timbre of voice invites you to join an imaginary, secret ceremony.

Hexas reworked one of the songs (cf. “Beneath The Sun”) from the “Liberty Nest”-mini-album. The track also has something ritual- and dark-like. The repetitive industrial-ritual sequences joined by the bewitching vocals of Gaya Donadio and the growling backings by Patrick Leagas only accentuate this feeling.

+ + + : This is an interesting and successful 7”. The reworked/cover version of Death In June is well-crafted and more anguishing than the original edit. I especially like the somewhat ritual touch running through the song, which also comes back in the remix of “Beneath The Sun”. There’s a kind of intercourse between the enigmatic and frightening vocals of Gaya and Leagas’ deep timbre of voice.

– – – : This is just a single and I simply would have liked to hear more songs..

Conclusion: This is an interesting single, bringing an early death In June song alive while getting you interested to discover Hexas (if you don’t know them yet of course). Welcome to the dark sound universe of Patrick Leagas and Gaya Donadio.