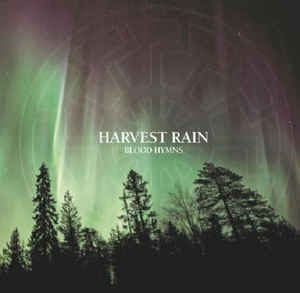 Background/Info: Set up in South Carolina (USA) by the brothers   Jason and Jamey Thompkins and later on joined by Christopher Melh Harvest Rain has already released many productions. “Blood Hymns” was originally released on OPN in 2007 and now got a re-release on Rage In Eden featuring the 14 original album songs plus 3 bonus cuts.

Content: If you’re familiar with Harvest Rain you already know the neo-folk inspiration running through their composition. Sometimes into ballad style, later on moving into reverie, most of the tracks however reflect dark atmospheres and the typical neo-folk guitar playing. You’ll also notice some epic arrangements on a few cuts.

+ + + : Harvest Rain moves in between traditional neo-folk and more diversified compositions. It became a quite diversified piece of work, sometimes revealing a sensitive approach. I like  some of the dreamy passages. The vocals add some extra passion. Among the bonus tracks there’s the pretty cool sounding “Hidden Hand, Hidden Head”.

– – – : A few tracks can’t totally convince me and that’s not that surprising if you consider this album features 17 songs. These passages are into monotony and even the vocals are sometimes missing a true climax (even if other cuts reveal a passionate way of singing).

Conclusion: I think this is the kind of work that will first of all ravish the die-hard fans of the band getting three extra cuts.