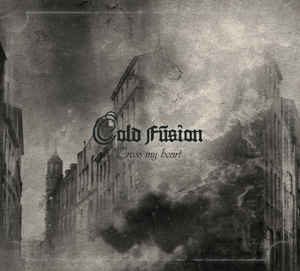 Background/Info: Marcin Bachtiak (label owner of Rage In Eden) has reactivated his Cold Fusion project. “Cross My heart” is the first new opus since “Architecture” (2011). It all looks like Bachtiak needed some period of rest to think about new music ideas.

Content: The very first notes of the work clearly reveal what it’s all about. “Cross My Heart” stands for bombast and orchestral arrangements. Deep, resonating tones and echoing drones in the distance are inviting the listener for an epic voyage sometimes reinforced by typical chants. This is the kind of music that might remember early In Slaughter Natives, but will first of all appeal for all lovers of heavy orchestral pomposity.

+ + + : This is epic music by excellence. It’s not only a cimematographic thing, but pure sonic drama. The visual appeal of “Cross My Heart” is rapidly coming through, this way awakening our most inhibited thoughts. The tracks have been masterly accomplished and I especially like the percussion- and drones parts. Even if the typical epic chants/choirs are pretty typical for this kind of music, it however remains a great experience in sound totally appropriated for this album. The tracks remained untitled, but the sixth piece is an absolute masterpiece accentuating overwhelming sound blasts.

– – – : Even if the epic chants are quite similar on most of the albums in this music genre, I regret Cold Fusion didn’t use them more. I also noticed a few single cuts, which are quite repetitive and less inspired. But globally speaking, you don’t hear me to complain.

Conclusion: I’ve always supported the work of Cold Fusion and it’s really great this band is back on track with a noticeable work, which is maybe one of the best productions in this artist’s history.