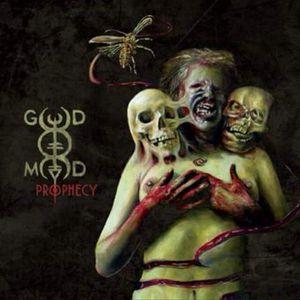 Content: Time is going fast and God Module now definitely belongs to one of the ‘old’ servants active in the wider fields of dark electronics. Master mind Jasyn Bangert is back on track with the 7th full length of his sonic creature called God Module.

God Module always remained very faithful and I would even dare to say ‘devoted’ to its dark-electronic roots with some EBM influences on top. Bangert seems deliberately avoiding any kind of innovation and still holds on to the good-old sound formula, which made his success. So there’s no real reason to innovate, especially when you consider the success of God Module. On the other hand, I sometimes wonder how an artist can hold on similar influences and ideas for years. I guess it’s a bit like each morning again having the same breakfast.

So there’s again nothing new on the God Module planet! But the recipe still works and again produces many cool songs. You get the familiar heavy zombie-like growls on top of an accomplished production based upon a strong and cold melodic side and danceable rhythms. “Prophecy” is one more opus finding its inspiration in the darker realms of electronic music and cold EBM.

But the main strength and characteristic of God Module probably lays in its kind of sound DNA, which in my opinion is the stamp of all great bands. There’s just one and only God Module, which you’ll instantly recognize.

“Prophecy” reveals 10 new songs. There’s no real intro, but just an instant sonic assault called “Wasteland”, which brings us into the typical dark and danceable mood of the band. Quite progressively the songs are accentuating a dense, obscure atmosphere throughout the songs. It’s not that innovative, but “Prophecy” maybe is the darkest and tormented work of the band. This is electro coming straight from hell. Some dark passages remind me of our own Belgian Prince of darkness: IC434. The haunting arrangements emerge at the surface make the particularity of this work. The song “Red Ribbons” is the ultimate spooky song of the tracklist and still one of the best cuts.

The tracklist reveals several attention grabbers, but I’m missing a kind of uncontestable hit. “Secrets” sounds a bit harder while driven by a pumping kick so this is maybe the song that will get a unanimous success. Time will tell.

One of the most surprising cuts is called “We Are Legend”, which reminds me a bit of The Cure in a darker and electro-driven approach. This song injects some diversity to the work.

Conclusion: No doubt about it “Prophecy” will please all God Module fans. It’s a well-crafted composition and probably the darkest God Module ever although not my favorite one.