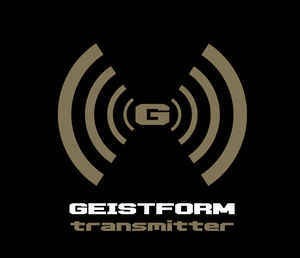 Background/Info: Rafael Espinosa better known under the Geistform moniker is an artist I discovered in 2002 on his debut album “Uno” released on Dirk Ivens’ label Daft Records. The Spanish artist never stopped releasing new productions, improving his writing and evolving in sound and influences. Hands became a comfortable home for Geistform where he’s now releasing his albums, and also the surprising vinyl 12” “Tension” in 2015.

Content: “Transmitter” moves on there where the album “Data Transmission” (already released 4 years ago now) left off and where the last year released vinyl “Tension” moved on with. The influence of techno music became an essential element of this artist although it remains driven by dark atmospheres and minimal noisy sequences.

The debut cuts are quite elaborate revealing some overwhelming sound blasts and vibrating noises. And just at the point where I got the impression that “Transmitter” was a bit stagnating Geistform moves on with a few transcendental pieces creating an effect of a total climax.

+ + + : “Transmitter” is one more production confirming the short distance between industrial- and techno music. The techno loops have been merged with raw and somewhat unpolished noises while carried by a monstrous sound production. There’s a great opening part, but especially the last 3 tracks left me breathless. Geistform  moves into a total trance approach.

– – – : No doubt about it, early Geistform fans will have some difficulties embracing the new album, which clearly sounds seriously contaminated by the techno virus. I don’t see it as a problem rather than an interesting point of discussion. I just regret a few tracks somewhere in the midst of the production, which sound a bit average-like.

Conclusion: “Transmitter” is addicted to techno music, but without neglecting the industrial roots. The result is an ultra danceable production for dark dancefloors.