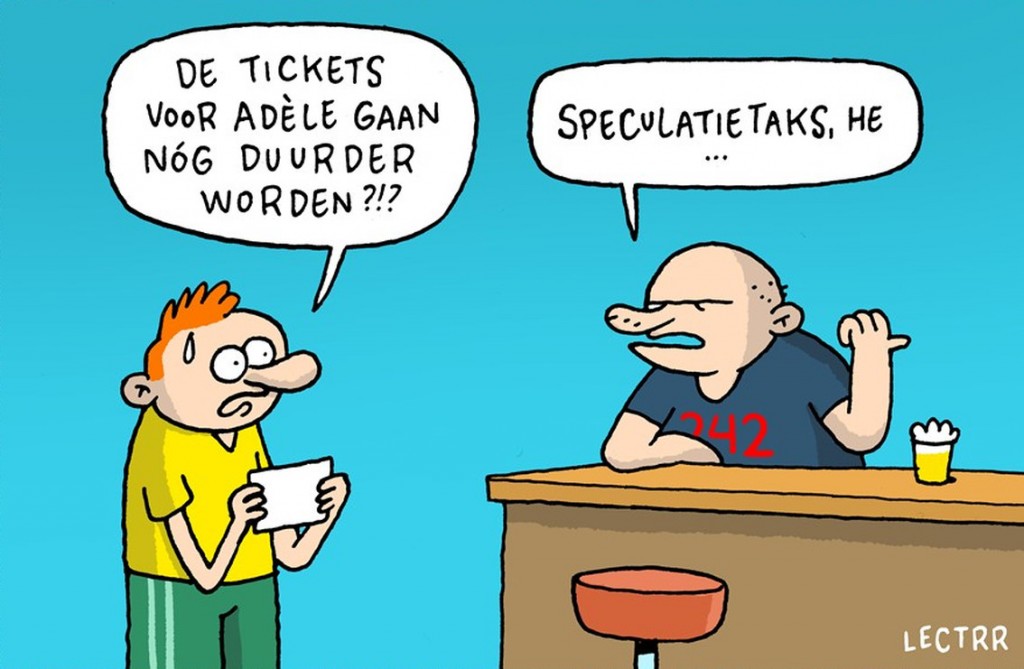 (Cartoon by Lectrr) – Belgian cartoonist Lectrr, who is the in-house cartoonist for one of Belgium’s most respected newspapers De Standaard, is also a big Front 242 fan so it seems. In the newspaper of December 12th we noticed a reference to Front 242 (see the bartender’s t-shirt) in a cartoon which was about expensive Adèle tickets available via Live Nation’s own illegal re-sell company Seatwave (we covered this re-sell scandal in detail right here).

In a chat we had with Lectrr a while back it seems he has been a Front 242 fan for over 20 years, more precisely when “Up Evil” was released. As it happens he also had been thinking about a Front 242 comic, but for now, we’ll have to do with a subtle hint in a cartoon. Coincidently Lectrr’s Tsū page recently welcomed its 242th follower. Maybe that was the trigger? 🙂

You can read more about Lectrr’s work on the official Lectrr website.

Since you’re here … … we have a small favour to ask. More people are reading Side-Line Magazine than ever but advertising revenues across the media are falling fast. And unlike many news organisations, we haven’t put up a paywall – we want to keep our journalism as open as we can. So you can see why we need to ask for your help. Side-Line’s independent journalism takes a lot of time, money and hard work to produce. But we do it because we want to push the artists we like and who are equally fighting to survive. If everyone who reads our reporting, who likes it, helps fund it, our future would be much more secure. For as little as 5 US$, you can support Side-Line Magazine – and it only takes a minute. Thank you. The donations are safely powered by Paypal.
Tags: Front 242, Lectrr