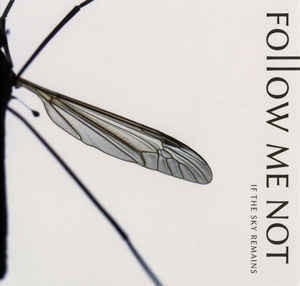 Background/Info: French duo Follow Me Not is already active for a couple of years now. “If The Sky Remains” is the sixth full length for Nicolas Guerroué and Mik Chevalier and their second album released on Unknown Pleasures Records.

Content: We know the passion of the French label for 80s cold-wave music and related genres. Follow Me Not totally fits to this sound, which clearly sounds inspired by 80s dark music styles such as cold-wave, new-wave and a dark kind of pop-rock. The songs have been accomplished with delicacy and evasive passages. A few cuts are more into a ballad style and can even be featured as soundtrack music.

+ + + : This band doesn’t bring any innovation, but simply composes the music they like, which is strongly inspired by 80s. The singer also has a very own and particular timbre of voice. I also like the melancholia, which is hanging over this opus. It sounds dark and yet it has something pretty relaxing. “1st Step” is a great song in the genre, but I also enjoy this song for the somewhat neo-classic like arrangements.

– – – : “If The Sky Remains” is a fully enjoyable piece of work; the kind of album, which is easy listening, but maybe missing cuts with a real apotheosis. It sounds nice, but at the same time the kind of album you might rapidly forget.

Conclusion: Follow Me Not brings the 80s back to life with some delicacy and a real devotion, but at the same time I’m missing some truly spirit.