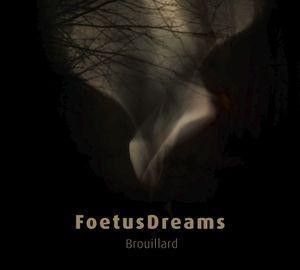 Background/Info: Winter-Light is a new label from The Netherlands devoted to dark-ambient music. FoetusDreams is their first singing and also the band releasing the first album by Winter-Light.

FoetusDreams is a project from The Netherlands as well, which seems to have released a few previous EP’s, but “Brouillard” is the official debut work featuring 10 cuts.

The album was released at the end of 2014, but as it here concerns a new label and a rather unknown band –you have to discover, I couldn’t resist making a review.

Content: “Brouillard” is the French word for ‘mist’ and the least I can say is that FoetusDreams invites the listener to join a dense and foggy sound universe composed with obscure sound waves and deep, vibrating tones. The basis of the work sounds pretty soundscape-like, but the buzzing sounds have been accomplished by diversified elements like metallic noises, spoken samplings and icy string passages. The opening cut featuring the intriguing sampling ‘There is only one God and that God is man himself’ on top of a chilling and humming composition left me absolutely breathless.

This is the kind of work you have to play at maximum volume otherwise you’ll miss some essential elements in the background. Using headphones is highly recommended as well.

“Brouillard” is fascinating for its experimenting with some vague ritual elements. The title track is an absolute masterpiece for adding mystic chants and intriguing French female spoken samples, which are clearly taken from a movie (which I can’t recognize). Notice by the way that Frédéric Arbour (Cyclic Law owner and involved in numerous projects) did the mastering of this work.

+ + + : The global production is absolutely phenomenal. There’s a strong visual appeal coming through while you’ll really feel the vibrating vibes emerging from this work. There’s a terrific sound climax reached on the title track.

– – – : Why haven’t I heard of FoetusDreams before this full length?

Conclusion: This album sounds like a truly apocalyptic masterpiece revealing several highlights. This is an album you have to purchase and I can only, but support a label taking off with such an outstanding production! FoetusDreams clearly has the potential to become the next big thing in dark-ambient music.